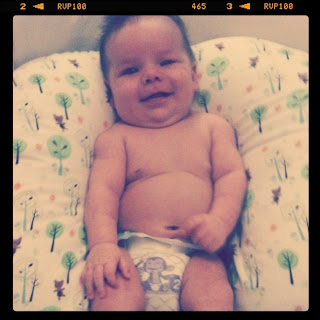 Before I update you on our story, I want to say thanks to everyone who wrote encouraging messages to me after I shared the Part 1 of our breastfeeding battle.  Your kind words helped me to persevere and we are in a much better place now.  Online breastfeeding support has really made a huge difference for me.  In honor of World Breastfeeding Week 2011 I decided to update our breastfeeding story.  Part 1 was written when Fisher was 3 weeks old, and I was really struggling.  Breastfeeding is literally the hardest thing I’ve ever done.  Things are so much better now, but without a lot of determination, help, and sheer stubbornness I would have given up.
Fisher is now 9 weeks old and feeding every 2.5 to 3 hours.  After our doctor put us on formula/pumped milk supplementing (see Part 1) it took us 3 weeks to ween off of that routine.  We were giving him up to 3 oz extra after every feeding, then went to 2, then to one and were able to use solely pumped breastmilk.  Our lactation consultant came back and weighed him before and after a feeding, and told us he still wasn’t getting enough.  I continued to pump after every feeding so that we could avoid using formula.  This was a really hard stretch for all of us.  Finally at his one month appointment Fisher gained enough weight to be taken off the supplements, slowly.  We dropped the extra oz of breastmilk from 1 feeding every few days until we were left with just the late night feeding before his long stretch.  We dropped that last week and he is doing really well.
Now I just pump after the first morning feeding to add to my stockpile.  I have a big pile of milk building in our freezer!  So exciting… 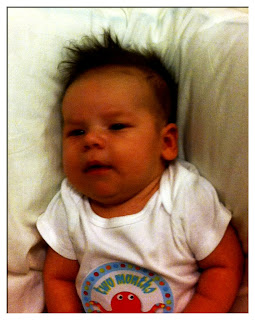 So many women told me that if I could keep going things would get better around 6 or 7 weeks, and that was so true.  Breastfeeding finally clicked for us between 6-7 weeks, and we are rolling now.  I’ve fed him at the mall, in the airport, on a plane, and he is gaining weight like a champ.  We had a little set back last week when I developed mastitis, but we pushed through and are doing well.
If you are thinking about breastfeeding, know that it will be hard but it will get better and it is so worth it.  Push through and fight for what is best for you and your baby.  I have such respect for all those mamas out there who tried and had to give up, because this junk is hard.  You will get no judgement from me, for sure.  Lots of people have asked me how long I plan to breastfeed.  Before Fisher was born I would say at least 6 months, hopefully a year.  Now I say that I’m really optimistic about today, and the rest of the week is looking good.  I really hope to make it to 6 months and then to 1 year, but I’m taking it one day at a time. 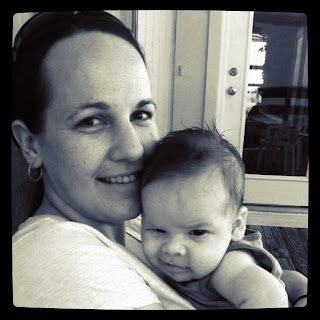 What is one piece of breastfeeding advice you wish someone had told you?

6 Comments on Our Breastfeeding Battle Part 2