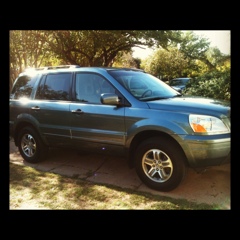 Meet Betty, our new-to-us ride.
Isn’t she lovely?
Here is her story.
After much discussion, Jed and I decided it was time to purchase a car.  We already have 2 cars, both completely free to us thanks to the generosity of Jesus/Young Life donors/family.  Those cars are 10 and 20 years old respectively.  We love them in their old age, and are so thankful for their faithful service. Big Red, Jed’s 20 year old GMC pick up has developed some issues that are pretty serious, so we know her days of dependability are numbered.  We thought about waiting until she died a natural death, but decided the wiser thing to do would be to start the search for our next car while we still had the flexibility of two working cars.
My 10 yr old XTerra has almost 150,000 miles on her, so we thought it would be good to make her our secondary car before the miles get too high.  We also discussed going to one car, but our current living/working situations don’t allow for that.
We set a budget of $10-12,000, knowing we could pay cash for that.  We are FAR from wealthy by American standards, but we have worked hard to save most of my paycheck each month for over a year.  We also have a 6 month emergency fund built up that we didn’t touch for this purchase.
We started looking on Craigslist for lots of different models.  We both like Tahoes, Outbacks, and other small SUVs and station wagons.  We looked at mini vans, but just couldn’t do it.  Not that there is anything wrong with mini vans.  They are great, I’m sure, just not for us right now.  We test drove cars from dealers and individuals, including 2 Tahoes that I’m pretty sure were stolen or from police auctions.  SOOO SKETCHY.
We looked at used car dealers in our area that were part of bigger dealerships with good reputations.  At one dealer we found a 2005 Honda Pilot listed at $16,915.  She was beautiful, but way out of our price range.  We wanted around 80,000 miles or less, she had 81,000.  She also came fully loaded with leather, a sunroof, DVD, 3rd row, rear air, and more cup holders than you could ever want or use.  Right off the bat the salesman told us he could mark her down to $13,900, because she was a Honda on a Chevy lot.  Still way out of our range.  We drove her, and she was such a smooth ride.  We went home, ate lunch and let Fisher take a nap.  We checked the Kelly Blue Book and her Carfax.  The Carfax came back saying that she was worth $330 more than the KBB value, which was $18,600.  Whoa.  So, she was offered to us at $5000 less than the KBB value.  She was still over our budget by almost $2000.  Not ok.  Then we pulled up the dealer website to look over the details again, and noticed that the rock bottom internet only price they had listed was $12,500.  Hmmm.  That might be doable for a car that is far beyond anything we had hoped to find.
We went back to the dealer that afternoon and told our salesman about the internet price.  He said he would have to honor it.  We went for it, on the contingency that our trusted mechanic could take a look at it first.  He asked us about financing, and we told him we were paying cash.  That threw him off completely.  He didn’t really know what to do, and said no one had done that since he had been there.
They wouldn’t let us use our debit card or write a check, so we had to wait until Monday morning when I could go to the bank and get a cashier’s check.  I handed the check to the dealer, they gave me the keys, and we were done.  No car payments for us!  We love our new ride and are so thankful to not have a big car payment every month.
Why pay cash?  Interest my friends, interest.  Let’s do a little math.  If we put down $1000 and financed $11,500, we would actually end up paying over $1000 extra for our car.  Yikes.  That’s a lot of money.
Have you ever paid cash for a big purchase? How did you make it happen?  Would you do it again?

3 Comments on Frugal Friday – Buying a Used Car with CASH