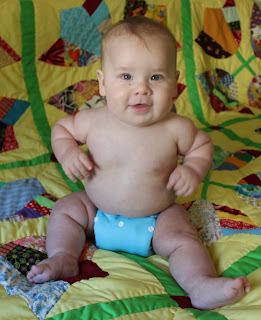 Some parents love it, some hate it, but almost everyone who has heard of Babywise has an opinion.  I’ve had a lot of people throw judgemental negativity at me when I say that I’m a fan.  I think most of them probably haven’t actually read the book.  After a Twitter exchange that left me feeling judged I decided to take to the blog to defend our parenting choices, not that I have to.
I read about 18 parenting books before Fisher was born, among them “On Becoming Babywise”, “Secrets of the Babywhisperer”, and “The Baby Whisperer Solves all Your Problems.”  All three recommend parent led routines for babies.  Babywise in particular is a little controversial, but I think a lot of folks judge the book by the misinformation that is out there.  I was wary of it going in, but had noticed that many of my friends whose children seemed particularly content and well rested used the methods.  I don’t agree with 100% of any of the parenting books I read, Babywise included.  We did not use the methods at first, but were pulling our hair out after 3 weeks of winging it with a baby who was having serious nursing issues and had his days and nights reversed.  We decided it couldn’t hurt to try, and it was like a miracle.
The nursing issues were resolved after his tongue tie was fixed, which you can read all about here.  We used Babywise and The Baby Whisperer’s advice to get Fisher’s days and nights straightened out, and he almost immediately started doing a 5-6 hour stretch of sleep at night.  We never forced anything, but guided him into a routine.  He occasionally fusses as he winds down to sleep, but we don’t let him “cry it out”.  As he grew he eventually dropped night feedings completely on his own.  At about 7 weeks he stopped waking up for the 1 am feeding, then dropped the 4 am around 12 weeks.  The first night he dropped each feeding I woke up freaking out that he hadn’t woken up, but he slept right on through.  Since then he has been sleeping from about 7 pm to 7 am with one feeding between 9-10 pm.
He is exclusively breastfed and has been since our nursing issues resolved.  He is in the 95 percentile for weight and head size, and 75 for height.  People often comment on how happy and content he seems.  Are we really blessed with a sweet, easy baby? Yes, and we fully realize that.  However, did we make choices that helped him become the sweet, growing boy that he is? Yes.  We do not let him cry it out, but instead listen when he cries and try to meet whatever he needs.  We do not keep him on a rigid schedule, but do use a flexible routine.  It works for us, and for our child.  We also babywear and cloth diaper and make our own baby food, but I’ll talk more about those parenting choices at another time.
What people think Babywise is about:
rigidity
strict schedules
crying it out
not listening to your baby’s needs
What Babywise is ACTUALLY about:
flexibility
routines – eat, play, sleep
interpreting your baby’s cries
listening to your baby’s needs and fulfilling them
If a particular parenting choice doesn’t appeal to you, it is easy to judge that parent and think that they are wrong and you are right.  I do it, you do it, and I did it a heck of a lot more before I had a baby.  I think the key to getting rid of the judgement is realizing that there is no one right way.  There are parenting choices that most can agree are universally bad, but after that we all have the freedom to choose to parent our children the way we see fit.  I hope that your choices are working for you and I respect them, and hope that you can respect mine.  If you want to learn more about Babywise and the Baby Whisperer, definitely read the books.  You can also learn more at Babywise Mom and the Baby Whisperer Forums.
Have you read Babywise?
Do you love it/hate it?
Do you use it?
If not, what parenting books/methods do you prefer?

2 Comments on Babywise Works for Us.