Our second baby is due at the end of April, and we are hoping and trying for a VBAC (vaginal birth after cesarean section).  This is one of a series of posts about Trying for a VBAC.  There are many reasons why we are heading this direction and I hope to share them with y’all over the next few months.  You can read the Bear’s full birth story here to see what our first child’s birth entailed.  If you read that story you will get a little glimpse into why we are now on this journey to VBAC and a normal birth.  This process has been all consuming for me and this blog is my space to express the way I feel about the whole situation.  Many folks have strong opinions about VBAC vs. repeat cesarean, and I hope that whatever your opinion might be you will respect mine.  VBAC is not the right decision for every c-mama, and it doesn’t always work out no matter how you prepare.  Our hope and prayer is that we can have the best birth possible for our little girl.
Because we are trying for a VBAC and lots of people have lots of questions about what that entails, we’ll be live tweeting as much as we can during the birth.  You can follow along on Twitter or on the Bare Feet on the Dashboard Facebook page for those updates when labor begins.  You can read my other pregnancy 2.0 updates here, and read all my pregnancy posts here. 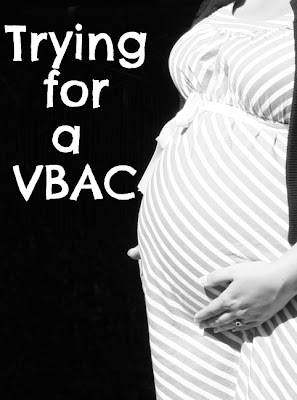 One thing I have learned on this journey is that all hospitals are not created equal.  Did you know you can find the c-section and VBAC rates for most hospitals online?  It’s true.  I so wish that I had known before what I know now.  I would have chosen a different hospital and OB for my first birth for sure.  I really like my first OB as a person, but do not like that she did #3,4,7, and 8 of the “Top Ten Signs Your Doctor Is Planning to Perform an Unnecessary C-Section On You.”  The hospital where I gave birth to the Bear also has one of the higher c-section rates in our area at 44.8%.  That means I only had about a 55% chance of normal birth at that hospital!  Scary.  Whether you are a 1st time mama or a mama considering a VBAC, please take the time to look into your hospital’s c-section rate.  The World Health Organization (WHO) recommends no more than a 15% c-section rate for hospitals, meaning that c-sections are used only in cases where they are truly needed and interventions that can lead to c-sections are eliminated.  Unfortunately in most of the Southern U.S. (Texas included), NO hospitals have c-section rates in the healthy zone.

When we first decided to try for a VBAC, I looked into hospitals and birth centers in our area.  Jed was pretty nervous about the idea of a home birth, so we decided not to go that route.  I called several birth centers in our area, but the one I really wanted doesn’t do 1st time VBACs.  If we get our VBAC this time around, I could birth there next time.  They did recommend the OB I chose because she is a big supporter of natural birth and VBAC.  She also practices at a hospital with one of the better VBAC rates in our area.  This is HUGE.  In the whole DFW area there are only 4 OBs who are known to be pro-VBAC – Dr. Lawson (my doc), Dr. Cummings (Denton), Dr. Downey (Richardson), and Dr. Weinstein (Frisco).  The hospitals where each of them practice have significantly higher VBAC rates than all the others.

So, why is it such a big deal to find a VBAC friendly hospital?  I want a hospital where the nursing staff is familiar with VBAC, and knows that it is safe and what protocols apply.  A staff that is not familiar with VBAC can sabotage your birth without meaning to, because they don’t know how a VBAC works.  I’ve read so many stories through the International Cesarean Awareness Network about women who have had no choice but to show up at the hospital as late in labor as possible so they won’t be forced into a repeat c-section.  I did not want to end up in that situation.  At Medical City (my former hospital), only 15-16 VBACs are performed every YEAR.  That means about 1 VBAC happens every month, sometimes 2 per month.  With those numbers, it is highly likely that some nursing staff have never seen a successful VBAC.  At Baylor (my new hospital) over 60 successful VBACs happen every year, which means they are seeing 1 per week, sometimes more.  That greatly increases the chances that the nursing staff will be familiar and comfortable with the VBAC process.

Here are the stats for my former hospital and my new hospital:
Former Hospital:
Medical City’s Cesarean Rate: 44.8%
Medical City’s VBAC Rate: 2.82%  They do about 15-16 VBACs per YEAR at Medical City.  That’s about 1 per month, 2 a few months.
New Hospital:
Baylor Medical Center’s Cesarean Rate: 38.6% Sadly, this is one of the lower rates in our area that is covered by our insurance.
Baylor Medical Center’s VBAC Rate: 10.74% They do 60+ VBAC births every year, averaging out to one per week, with 2 a few weeks.

How does your hospital rank with c-sections and VBACs?

You can read all of my posts about Trying for a VBAC here.

3 Comments on Trying for a VBAC: Choosing Your Hospital or Birth Center