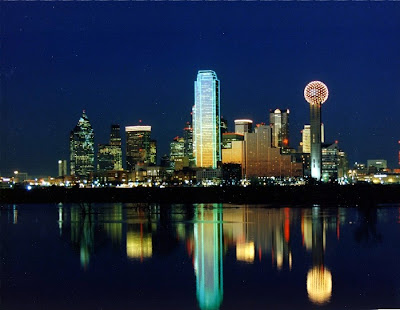 We moved to Dallas 2 years ago next week. I was immediately overwhelmed by culture shock. In Asheville, most people that we know drive used cars and dress as though they are about to go hiking. Bathing is optional and there are more white people with dreadlocks per capita than anywhere else in the nation. Dallas is all about shiny new cars, high fashion, and looking put together. Jed recently commented that he didn’t feel pretty enough to shop at Whole Foods. He went there during the lunch hour and it was like a singles’ mixer for J.Crew models.
Needless to say, my Chacos, Danskos, and Crocs do not fit in here. There is a saying here that we quickly learned to say when we are shocked by the excess and luxury that surrounds us – T.I.D. “This is Dallas.” Take one trip to North Park Mall and you will say it a lot.
Don’t get me wrong, we love it here. We love our friends and our community, but we are still overwhelmed sometimes by the excess in this town.
The Dallas Morning News (our local paper) is running a series called “Drowning in Debt” that I love. It gives a great perspective on the debt crisis in our nation and in our city. I was not surprised to read that Dallas has the 2nd highest consumer (non-mortgage) debt of any major city in our nation. I think this has a lot to do with the T.I.D./keeping up with the Jones’ attitude. In this town the Jones’ are Jerry Jones and his crew, and there is just no way to keep up.
Here is what the Dallas Morning News had to say about debt in Big D:

For the last four years, Dallas-area consumers have been dogged by debt.
During that period, the area consistently has had higher average consumer debt loads and lower average credit scores than the nation as a whole.
Among the 20 biggest U.S. metro areas, Dallas trails only Seattle in average consumer debt, according to Experian, one of the three national credit bureaus.
Dallas-area consumers in March carried average debt of $26,599 excluding mortgages, compared with a national average of $24,775, Experian said.
The Dallas-Fort Worth area also has had lower average credit scores than the rest of the nation.

To be sure, many consumers find themselves deep in debt through circumstances beyond their control. Many lose jobs and struggle to keep up with bills. For others, unexpected medical expenses overwhelm their budgets.
But personal finance experts estimate that at least 10 percent of debt woes are a direct result of overspending – pure lack of discipline.
“It’s an epidemic in our country,” said Brad Klontz, a financial psychologist and co-author of Mind Over Money. “I am finding that people with excessive debt associate money and material things with increased power, status and happiness, thus leading them to overspend.”
Experts say several psychological motivators drive consumers’ urge to splurge, including the desire to fit in with peers, the need to relieve stress or escape from problems, and the sense that their self-worth is derived from how much money they have to spend. Sometimes, consumers overspend just to change the way they feel.

We have no debt and plan to stay that way. But, I have definitely made purchases to fit in and dress more like my friends. I shop at a certain overpriced store (that I love) because the clothes are beautiful and even a t-shirt from there is way cooler than the Old Navy version.
After college I bought a brand new car, because I thought I deserved it. I had to sell it one year later for a $3000 loss because I couldn’t afford the payments. That was a BIG mistake.
The debt that we had prior to becoming debt free was almost 100% caused by lack of discipline. We spent more than we made because we wanted more stuff. The difference now is that we have to get past caring about keeping up. I don’t know if we will ever stop caring completely, but I hope the feeling of being debt free will keep us going.
Have you ever bought something you regretted – either to keep up/look cool/because you thought you deserved it?

7 Comments on Frugal Friday – This is Dallas.