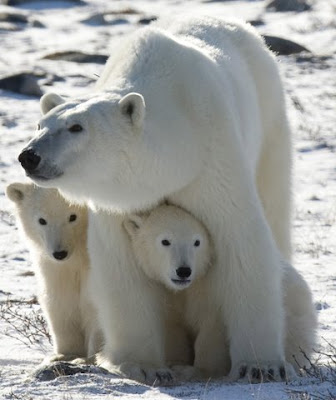 I’ve never been one who remembers my dreams. Throughout my life I’ve had a few spells of repeated nightmares. In the 4th grade I read Bram Stoker’s Dracula (sneaking it into my bedside table) and had repeated vampire nightmares for weeks. In 3rd grade it was pirates, and even younger it was a T-Rex coming in my 2nd floor bedroom window because I read that they were 2 stories tall. Perhaps someone should have been guiding my book choices. 😉 These episodes are few and far between, and in general I wake up and forget all about my dreams.
Then came pregnancy.
Now I have CRAZY, vivid dreams almost nightly. I dreamed that Jed was cheating on me, and the dream came complete with multiple reaction scenarios including me hitting him over the head with a chair WWF style. After that one I woke up mad at him and made him wake up and hold me. Yes ma’am, I am ridiculous.
Last night was the craziest dream series so far. I dreamed that a polar bear was attacking Windy Gap, the Young Life camp where Jed and I met. The camp looked a little different in my dream, but all the people were the same. The bear kept creeping onto the little island at camp and taking people out one by one. The most traumatic thing is that my point of view was video taping each person as they were attacked. Weird, right? And awful. It was bloody and graphic like a Quentin Tarentino movie, and I had to watch several dear friends get eaten by the beast.
I really wish I knew where this dream came from in my subconscious. I did watch the early seasons of Lost when there was a polar bear involved. I worked as a keep assistant at the zoo in my hometown during high school in the Bears and Small Carnivores section, but we didn’t have any polar bears. Arkansas is not conducive to recreating a polar environment. Windy Gap does have bears, but they are cute little black ones, not the vicious white ones from the great north. I will never know where the heck this nightmare came from, but I sure hope it isn’t a repeater. How does a baby growing inside me cause me to dream of a rage filled polar bear? So bizarre…
What is the weirdest dream you’ve ever had?
Did you dreams get crazier during pregnancy?

2 Comments on Weirdest Dreams Ever