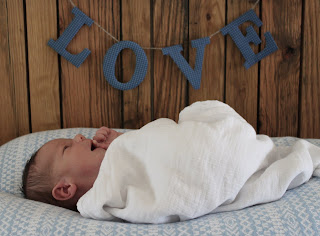 Warning:  I’m about to get real, so if you don’t want to read about the details of our breastfeeding struggle, come back another day.
Breastfeeding is the hardest thing I’ve ever done.  I know that it is supposed to be natural, easy, and is of course best for baby.  I came into it wanting to do it for a year.  Now I’m hoping to make it a month.  I had no idea how difficult it would be, and feel like I was not at all prepared even though we took a class and I read several books.  The first three days were easy, and then my milk came in.  Immediately I was incredibly engorged, and Fisher couldn’t latch on correctly.  He had been circumcised that morning, so he was not in a great mood.  We were still in the hospital because of the c section, so the lactation nurse tried to help.  I was on so much pain medicine that I don’t really remember what she had to say.  We came home that night (Friday) and it was a battle for the next 3 days.  We went to the doctor for his one week check up that Monday.  He had gained weight, going from 7 lb 15 oz to 8 lb 2 oz.  We met with a lactation nurse who gave me nipple shields for my bloody, torn up nipples.  They were a huge help, and we thought our problems were over.
One week later we went back for our 2 week check up.  We walked into the appointment thinking everything was great and that our sweet boy was doing well.  He weighed in at 8 lbs, having lost 2 oz and not back to his birth weight of 8 lb 10 oz.  Our pediatrician was immediately concerned and assumed that the problem was my milk production.  He put us on a regimen of nursing for 10 min each side, then supplementing with a bottle of expressed breast milk or formula while I pumped.  We repeat this cycle ever 2.5 hours.  We were sent back to the lactation nurse, who suggested fenugreek and blessed thistle supplements to increase my supply.  We kept this regimen up and went back to weigh in that Friday.  Thankfully our boy gained 10 oz and was back at his birth weight. 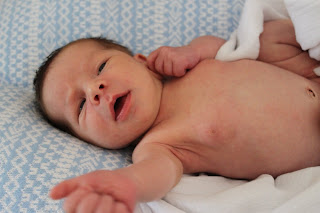 We scheduled a visit with a private lactation consultant who came highly recommended, and also had a friend who is a retired lactation nurse come visit.  Our friend gave me great tips to help with our latch issues, and suggested that the nipple shields could be interfering with my supply.  Judy, the private LC, was awesome.  She weighed Fisher on a scale that showed how much he took in on each side, to the gram.  She also examined his mouth and noticed that his tongue was closely attached to the bottom of his mouth.  He was tongue tied, which was causing all of his nursing issues.  Thank goodness she noticed it.
Yesterday we went to a children’s ENT Doctor who examined his mouth and said it would be in our best interest to have a small surgery to clip the tissue on the underside of his tongue.  Being tongue tied could affect his speech later, and was definitely affecting his nursing and my pain during his nursing.  We are hoping and praying that our nursing problems will end soon, as the result of the surgery and lots of prayer.  So far I think I can tell that he is getting more, and less is coming out when I pump after, but it is hard to know definitively.  We will probably have to bring the LC back out to help one more time.  I pray that we will be done with the regimen of feed/supplement/pump soon.  It is incredibly exhausting.  I’m hoping for improvement and that we will be able to get successfully nurse for the next 3, 6, 9 months, or even a year.  For now, I’m taking it a day at a time.
Have any of you gone through nursing difficulties?
I would love to hear from you.

13 Comments on Our Breastfeeding Battle